What Is a Blockchain Game? A Complete Overview

Since the first blockchain game was launched, this field had changed dynamically. However, Q1 of this year has become booming for crypto gaming, as its activity has grown by 2000% compared to 2021. Even though currently blockchain games are going through a recession due to global political issues and the cryptocurrency market state, there are still investments in these projects. In the last quarter, GameFi (gaming & finance) got $2.5bn of investment, indicating there’s still growth potential in this industry.

Yet, what is blockchain gaming in the first place? Some people think that it’s something related to NFTs, while others aren’t confident about this technology gist. In this article, we’ll clarify the concept of blockchain gaming and explore its benefits for businesses and individuals. Also, you’ll find helpful insights and forecasts on blockchain gaming from a professional NFT game development company.

What Are Blockchain Games?

Before answering the question – what is a blockchain game? — let’s discover the meaning behind the term itself. Basically, the blockchain is a distributed ledger that operates as a foundation for cryptocurrency transactions across a particular network. This technology can be of different types but still aims to store, transmit, and protect users’ digital data.

So, what is a blockchain-based game? The central core of any blockchain game is the DeFi (decentralized finance) that makes these games a part of the entire system, containing extensions like crypto wallets and marketplaces. Players can experience traditional gaming in these games and earn crypto-collectibles for in-game activity.

As a result, blockchain games became a new way of earning cryptocurrency that’s fun and affordable for different audiences. Yet, some differences in the process of entering a game, monetization models, and interaction with blockchain make this field worth special attention.

How Is Blockchain Used in Games?

For crypto games, blockchain has become a multitool that allows its application in various forms. So, let’s have a look at the popular components of blockchain games.

In-game NFTs. In many blockchain games, there’s an opportunity to earn NFT gaming assets that are usually in the form of avatars, weapons, rare artifacts, etc. These NFT assets are blockchain-based and can be exchanged for a specific cryptocurrency, depending on which blockchain it runs on (e.g., Ethereum or Solana).

Play-to-earn. The key point in play-to-earn games is earning cryptocurrency in the form of token rewards. The thing is each trustworthy P2E game has its own tokens (collectibles that play the role of cryptocurrency), like the PVU tokens in the Plant vs. Undead game. Earning them for conquering quests and levels, players can later exchange them for other cryptocurrencies or sale for traditional currency like USD.

Security assurance. Once a player has earned an NFT/token/cryptocurrency in a game, they have to be protected, as no one wants to lose their rewards while keeping or transferring. With a robust security system, blockchain creates barriers for backdated or other changes, preventing tampering.

All of the mentioned ways of blockchain use cannot operate or be trustful without this technology. Thus, blockchain game creation implies hard work developing branded tokens for your project. It’s also crucial to draw famous venture capitalists (VC) for better credibility and get a deal to launch your tokens on reliable exchange platforms. In addition, you can reach your goals effectively and scale any project using our metaverse game development services.

The Main Benefits of Blockchain Games

A company can realize the development of blockchain games from various industries, not only the gaming ones. The multiple benefits of NFT games and other types raise interest and generate strong demand for these projects so that they can become a great way of investment. There are the most valuable strong sides of blockchain-based games described below.

Players can affect their gaming progress in some traditional games by purchasing specific items like better armor, weapons, and other boosters. However, these assets are valuable only in a game and give players nothing but extra points in a virtual world. That’s because a game belongs to a single company that only offers players opportunities to achieve gaming goals faster. For sure, it’s an effective monetization model. But what does it provide to players?

In the case of blockchain games, players invest and earn money instead of wasting them for good. Players can buy and gain in-game NFT assets, store them on a third-party wallet, and withdraw them in different ways, like cash out or exchange on cryptocurrency. Thus, blockchain games allow gamers to own their gaming items immutably and benefit from them even when they aren’t playing.

The blockchain’s main point is how data is structured — as a block of chains that can be only added, never edited, or deleted. Each block has a unique hash code, just like each person has fingerprints that don’t look like any others. Blocks also contain data about a particular transaction and a previous block hash.

So, that’s how the security system works. Since each block has its unique hash and the previous block’s hash, changing a single block will make all the following invalid. This feature makes it extremely hard to temper the data of a block as it requires all the other blocks to be changed for a transaction to pass successfully. However, it’s not even the end of protection.

There’s another security feature in the blockchain called the proof-of-work (PoW). This mechanism slows down the creation of each following block by repeated authentication. It takes about 10 mins to generate a new and valid hash. As a result, tampers would have to recalculate this mechanism as well as find the correct hash combination for each existing and the following block in a chain.

In addition, blockchain is constantly evolving in order to become even more secure. Thus, now it uses a smart contract — a program that regulates financial relationships (economies) between all the parties that should participate in a transaction. Usually, smart contracts of blockchains for gaming contain rules on the terms of NFT/token earning and their secure trading.

Any blockchain doesn’t have a one and only owner that manages transactions. In contrast, it’s a decentralized system with a significant number of so-called nodes — computers that review and verify crypto transactions. These nodes can be located all across the network and store the history as well as copies of all crypto operations that took place on a platform.

For instance, when you transfer or receive money for a cryptocurrency deal, all the nodes should ensure that no one is tampering with the data. Only when all the nodes have approved the authenticity of the blockchain’s structure, a transaction may pass. Additionally, when a new block is created, it sends to each node that has a copy for them to ensure it hasn’t been touched.

Also, anyone in a peer-to-peer network can access a transaction’s primary (not confidential) details and review its history. Thus, it’s easy to ensure ownership rights and financial operation status. These features give additional credibility to the system, as it keeps all the processes transparent and doesn’t centralize them in a single place.

Economically speaking, blockchain games are perfect for earning money for both sides — players and game owners. Since the key concepts of such projects are crypto-finances and a focus on earnings, it creates continuous money traffic. With a current count of 173.17m, gaming-related transactions are significantly higher than any other in the crypto market sector. The second closest area is DeFi, with 8.86m.

As a result, while gamers make money on playing a game, project owners make a fortune charging entering and transaction fees. Moreover, by selling in-game NFTs and developing branded tokens, your financial indicators can go off the charts. And the best part of this model is guaranteed user interest, as an opportunity to earn by playing games is a golden mine for many people.

Since the global gaming industry went ahead of most entertainment fields like music and made it to the second (after TV) with the highest revenue, this sector started developing even faster. Blockchain has become the next big thing in gaming and spread worldwide. Yet, what future of NFT games and blockchain gaming, in general, can we expect, considering the current state of the crypto scene?

Theoretically, since blockchain games are related to the cryptocurrency market, there should be a correlation between these two fields. However, despite the current bear market conditions (a period of the market crash), blockchain-based games experience a steady uptick in daily active users and transactions.

At the same time, the new opportunities for crypto game owners are extending along with the metaverse that’s hitting the ground running. The blockchain-powered virtual worlds are estimated to have $800bn market opportunities, and $413bn of them (more than half) belong to the gaming market.

So, the bear market should cause no worries among blockchain game owners. In contrast, such a lull is a perfect time for careful game development in order to disrupt the blockchain gaming market as soon as the bull market (a period of the market rise) takes over.


Go Ahead of Competitors with Professional Blockchain Game Development

The blockchain gaming market is expanding rapidly. From only one game in 2017, there are around 400 active projects in 2022, meaning it’s becoming more challenging to stand out over time. However, this industry is young enough to be fully developed, so there are still plenty of things to improve in order to provide your players with a better user experience.

With the professional support of Game-Ace, an experienced game development company, you can create a blockchain game of the crypto gaming audience’s dreams. The mix of careful analysis, skillful game development, and our specialist’s blockchain expertise is the key to assuring your project a very special place on the market.

Contact us to learn more about our full-cycle and outsourcing game development services. 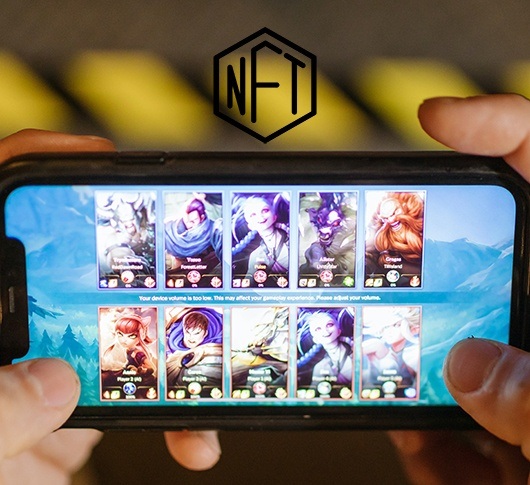 How Do NFT Games Work? Common Questions Answered
Get in touch
By sending this form you agree to our Privacy Policy. The information you provide will be added to our CRM system for further communication.
Get in touch
Menu
Address
Headquarters:
Archiepiskopou Makariou III,
1, Mitsis Building No. 3, Office 310,
1065, Nicosia, Cyprus
Representatives:
Germany
Ukraine
Bulgaria
Canada
Contact Us
[email protected]
Stay connected
© 2005-2023 Game-Ace
menu
close